John Locke and John Stuart Mill said at birth the mind is a tabula rasa (blank slate). I do understand how tabula rasa is applicable to the phenomenal perceptual world of objects and appearance. For at birth it is true we humans are indeed abecedarian phenomenal creatures. However, I maintain that tabula rasa is not applicable or relevant to the noumenal apperceptual world. That is, at conception there is a huge amount of a priori transgenerational foreknowledge available to us. I intrinsically agree with W. D. Hamilton who postulated, “the tabula of human nature was never rasa.” John Locke concentrated on the phenomenal world and viewed a world “out there” of appearance and perception. George Berkeley concentrated on the noumenal world and viewed an “inner world” as the true “thing-in-itself.” Thus, I propose we truly do have two paths (phenomenal and noumenal) in the manner we view, become aware of, comprehend, interpret, and understand the reality of the world we live in. We really do have two paths of meeting our needs, enhancing balance, and self-evolving. 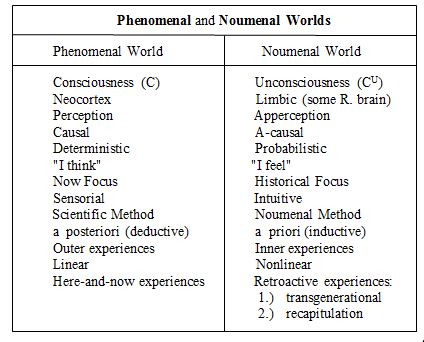